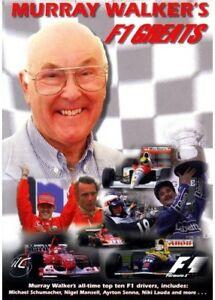 Over de documentaire:
For more than 50 years the amazing Murray Walker has been wowing Formula One fans all over the world with his whizz-bang commentary, priceless 'Murrayisms' and his unquenchable 'trousers on fire' enthusiasm. And unless we're very much mistaken, here is a 'FAN-TASTIC' opportunity to get Murray's exclusive ratings on the greatest Grand Prix drivers of the last half century.

Who better to pass judgement on hundreds of Formula One races of the past 50 years than a man who's commentated on most of them, seen all the champions up close and personal and whose encyclopaedic knowledge of the sport and obsessive passion remain spectacularly undimmed?

So we locked the great man in his study and refused to let him out until he finally agreed to boil down his countless racing favourites into a top ten - but just who will be Murray's Number One? Is it reigning champion Michael Schumacher? Or what about the legendary Ayrton Senna? There are three Brits in the running - Clark, Stewart and Mansell. Could it be the French Professor Alain Prost or the courageous Austrian Niki Lauda? Or how about a few blasts from the past - Fangio, Ascari or Moss. Murray himself presents this unique chart of Formula One greats and we'll be seeing some amazing racing archive, from the black and white days of the Maseratis and Vanwalls right up to Ferrari's triumphant 2002 season, as well as a few one-on-one chats with the champions along the way for some special insight into their favourite memories.

All the greatest moments are here - Schumacher's duels with Hill, Villeneuve and Hakkinen; Mansell's wheel to wheel battles with Senna; some magic from the great Brazilian himself; classic action of Sir Stirling Moss and much, much more. And of course no Murray Walker programme would be complete without a liberal sprinkling of choice Murrayisms or as Murray prefers to call them - predictions which turn out not to be true! It's all introduced from the Goodwood Festival of Speed, so there's a good chance you'll also be seeing some of the actual cars that made our top ten Formula One drivers famous. So if you want to know who Murray rates as the ten greatest drivers of all time, just fasten your safety belt, sit back, relax and enjoy a high-octane journey through the very best the sport can offer - in the company of 'The Voice' of Formula One.